Why is Civil Aviation Regulation More Effective than Financial Regulation?

Why is Civil Aviation Regulation More Effective than Financial Regulation?

Some countries and airports were more impressive than others. Some appeared to go through the motions without being attentive when detection technologies broke down or when throughput became difficult to manage. Others were excessively rulish and officious, making life unreasonably difficult for disabled people with special needs or Muslim travellers. Some enforce inflexible rules that seem hard to justify such as requiring every passenger to remove their shoes. For the most part, however, a productive interplay of bright-line rules and principles (pre-eminently, terrorism prevention) and private-public hybridity emerged experimentally. Some checking of luggage is done by airline staff, some by different kinds of private security contractors and in some circumstances armed public police arrive on the scene. Most critically, the private contractors do not seem to be captured by the commercial interests of the airlines or the airport corporations. The mutual checking of public regulators and private regulators mostly seems to work, as electronic scanning did in reducing hijacking in the 1970s.

Air travel was extremely dangerous during its early decades, as the haunting footage of the Hindenberg disaster reminds us. Insurance companies for a long time refused to cover air travel in many countries and even then only when governments set caps on their liability: while they were always happy to insure what became the objectively much more hazardous activities of road and sea transport. Even after the rise of terrorist hijacking, air travel remains a safer activity than taking a car on the road or a ship to sea. This is surprising given the larger number of things that can go wrong, how much more technically demanding it is to travel through the air than across water or land. The safety gap is not small. Driving a car for more than 400 km or a motorbike for 10 km is more dangerous than flying a plane for 10,000 km[2].

The hypothesis of some evidence-based health system designers is that a reason progress in air safety in the twentieth century has been even more remarkable than progress in health care is that air safety systems are even more determinedly committed to correcting mistakes, as opposed to punishing failings. When a pilot does something wrong that causes a near-miss or a separation error, in general there are no sanctions for reporting this, indeed there are professional rewards for contributing to a learning culture of air safety by confessing. Airline pilots are rewarded for triggering prevention. Cover-up in contrast is punished because it prevents prevention. Cover-up is also hard to do because of the ethic colleagues have of exposing error to analysis.

Health care collegiality is similarly committed to open analysis of poor quality diagnosis and treatment, especially when there are no consequences visible enough to threaten litigation. But commitment to error reporting and analysis has in the past been more total and more rigorous with air safety than health. And cover-up of medical error remains endemic on the part of physicians and other professionals who fear acknowledging and apologising for catastrophic errors that could threaten their licence. Yet a sea change is occurring in Western health quality institutions because of the empirical evidence that acknowledgement and apology for medical error does more to discourage litigation than to encourage it[3]. The US, Australian and British health systems are among those that are being transformed by increasingly systematic approaches to recording adverse incidents, quantitatively analysing patterns in such incidents, crafting interventions to attack the risks revealed and researching the impact of those interventions. The momentum in health care is for shifts from a blame culture to a learning culture. If this analysis is right, it will assist the health system to build on the formidable record it already has of evidence-based reduction of risks from many kinds of diseases and injuries.

The trouble with criminal justice on this analysis is that it encourages cultures of denial.   The preventive imperative to tackle an underlying problem of substance abuse is not grasped because both the crime and the substance abuse that drives it are denied. The anger-management problem or the patriarchal domination that drive a pattern of violence are truths covered up instead of confronted. The choice for a punitive blame culture in justice institutions is a choice for a higher crime society.

Christopher Hodges’ (2015: 326-9) Law and Corporate Behaviour[4] considers another possible reason for the remarkable effectiveness of British civil aviation in making air travel so safe. This is that it has been so responsive. He refers to the following pyramid model from the flexible enforcement policy of the Civil Aviation Authority. 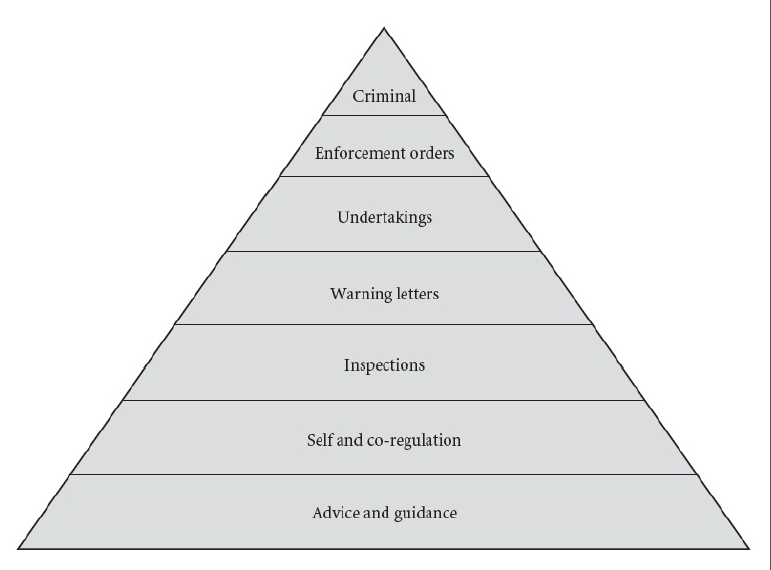 In addition, the British Civil Aviation Authority used the following diagram for its rather responsive “Spectrum of Enforcement”. 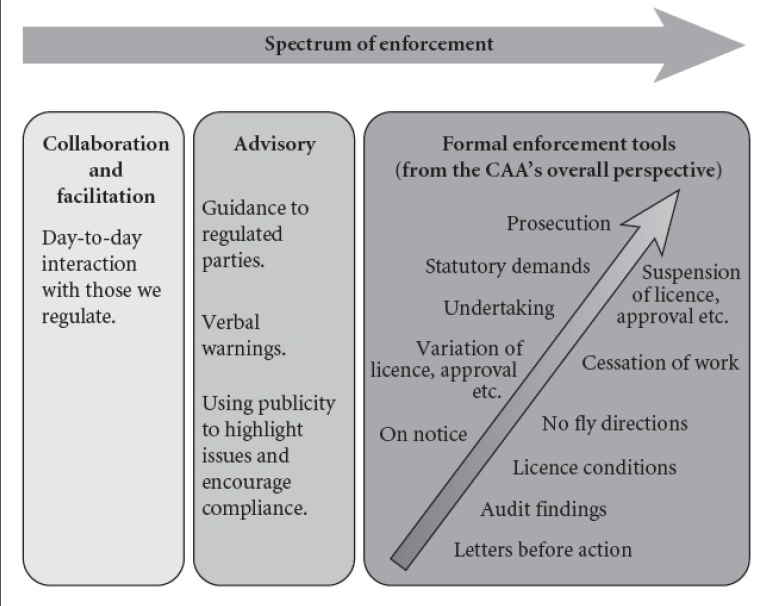 Hence, it is possible that civil aviation regulators, even in developing economies, are comparatively effective in securing our safety not only because they are less captured than financial regulators. It is also that they are more responsive than financial regulators. They do use punishment, even the corporate capital punishment of licence revocation when they have to, but as a last resort. And they tend to be careful to reward confession of error, while being sharp in punishing cover-up. This seems plausible also because of the evidence that when financial regulators do become more responsive, they are more effective.[5]