United Nations, African Union and other peacekeeping has grown. What are the kinds of interventions that create wars and make things worse for people? How can peacebuilding contribute to justice and development? How do war and peace cascade from one hot spot to another? How can peacebuilding be locally responsive and restorative as it transforms structural causes of war?

Since 2004, I have led the Peacebuilding Compared project with support from Leah Dunn, Kate Macfarlane, Deb Cleland, Camille McMahon, Valerie Braithwaite, Hilary Charlesworth and many others from conflict zones where fieldwork is conducted. Many of my co-authors, such as Bina D’Costa, Aderito Soares, Ali Wardak, Ali Gohar, Tamim Rashid, Naing Ko Ko and Aleksandar Marsavelski were raised by the country where this fieldwork was completed, and other co-authors are regional experts. Peacebuilding Compared  follows, until 2030, the 50-60 most significant armed conflicts across the world since 1988.

Over 700 variables are coded for each war. Specific wars also stand alone as contextually rich accounts of successes and failures of peace. The Australian Research Council has funded Peacebuilding Compared since 2004. 26 conflicts now have preliminary coding and sustainability of peace will be followed for 20 years (until 2030). The aim is a unique hybrid of ethnographic and quantitative research. Peacebuilding Compared is led by John Braithwaite, who drives all fieldwork in collaboration with more expert co-authors and PhD scholars, usually citizens of the wartorn society.

The project integrates my life work because crime prevention, especially organizational crime prevention, and business regulation turn out to be critical pieces of peacebuilding. To date, I have preliminarily coded 34 armed conflicts and interviewed more than 4000 warmakers and peacemakers around the world thanks to support from the Australian Research Council.

Five Peacebuilding Compared books have been published so far. Videos have also been produced from the project, for example on the Peace Conference we conducted in Bougainville and the film ‘Homebound’ based on the Bangladesh fieldwork by Sari Braithwaite.

The Australian Research Council has funded Peacebuilding Compared since 2004. 26 conflicts now have preliminary coding and sustainability of peace will be followed for 20 years (until 2030). The aim is a unique hybrid of ethnographic and quantitative research. Peacebuilding Compared is led by John Braithwaite, who drives all fieldwork in collaboration with more expert co-authors and PhD scholars, usually citizens of the wartorn society. 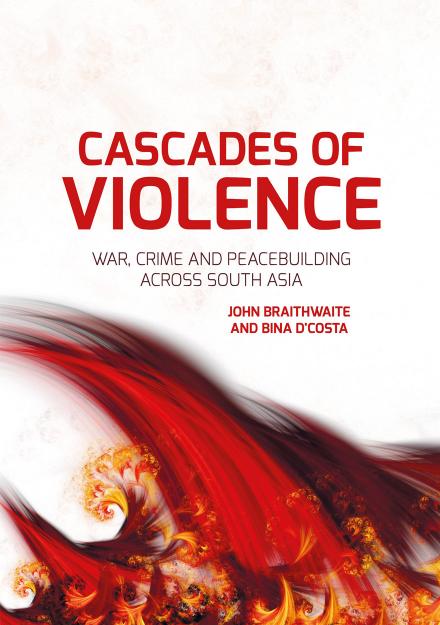 Cascades of Violence: War, Crime and Peacebuilding across South Asia

War and crime are cascade phenomena. War cascades across space and time to more war; crime to more crime; crime cascades to war; and war to crime. As a result, war and crime become complex phenomena. That does not mean we cannot understand how to prevent crime and war simultaneously. This book shows, for example, how a cascade analysis leads to an understanding of how refugee camps are nodes of both targeted attack and targeted recruitment into violence. Hence, humanitarian prevention also must target such nodes of risk. This book shows how nonviolence and nondomination can also be made to cascade, shunting cascades of violence into reverse. Complexity theory implies a conclusion that the pursuit of strategies for preventing crime and war is less important than understanding meta strategies. These are meta strategies for how to sequence and escalate many redundant prevention strategies. These themes were explored across seven South Asian societies during eight years of fieldwork. 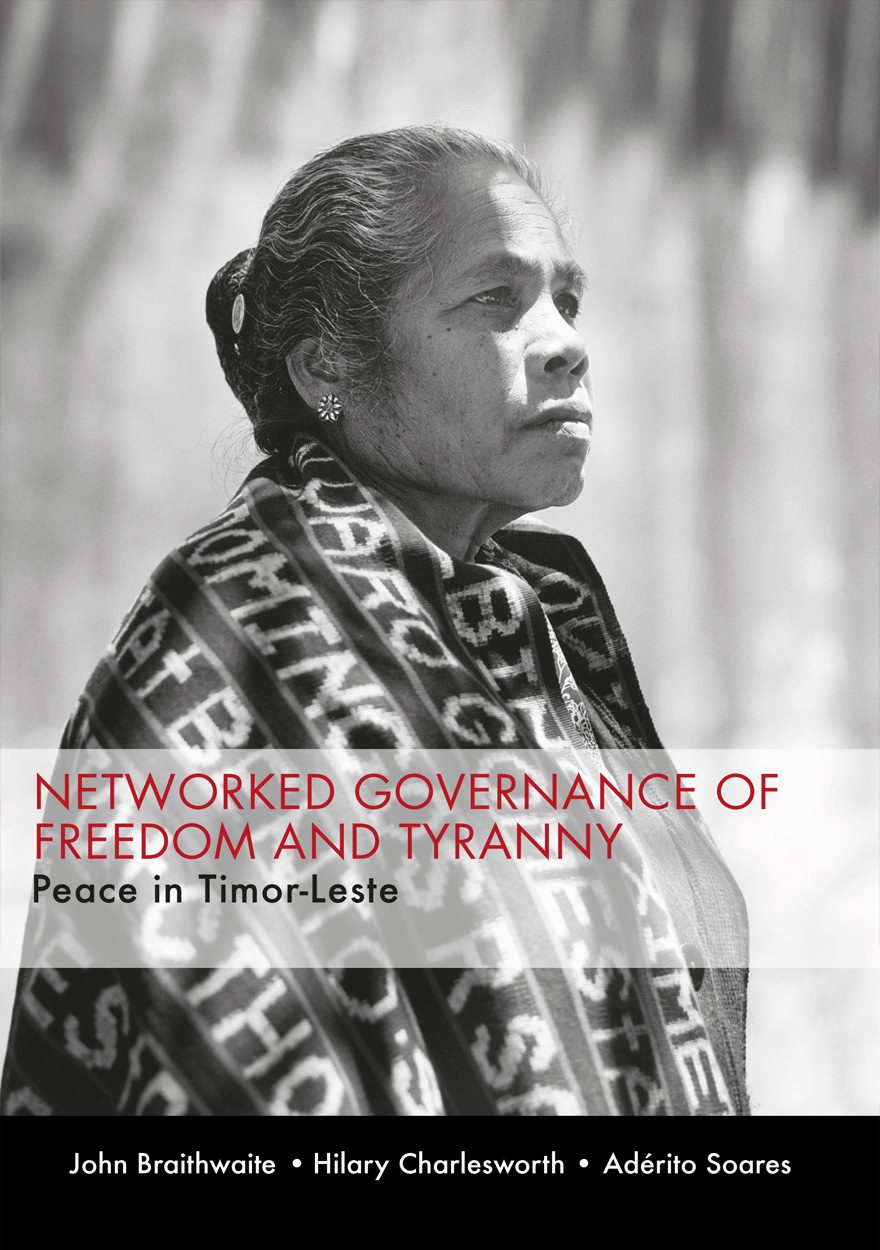 Networked Governance of Freedom and Tyrannny

Networked Governance of Freedom and Tyranny (with Hilary Charlesworth and Aderito Soares) is about how networked struggles for justice, peace and freedom are the mainstay of progressive politics in the kind of world we inhabit today. Networked governance by the weak can overwhelm great powers, rendering realist international relations theory predictively false. In politics, there is commonly a tipping point where a networked governance of freedom becomes a networked governance of tyranny. According to our analysis, the crucial failure in building the Democratic Republic of Timor-Leste after this conflict was that it was not republican enough. It was too focused on building a state controlled by the three greatest leaders of the resistance and the party of the resistance. The networks that made the triumph over realist forces possible were dispensed with when they were most needed to act as checks and balances on the new executive. Networked accountabilities must humble the power that enables regimes to change.

Here there is common ground with other theoretical traditions, such as the notion of ‘destabilization rights’ introduced by Roberto Unger, Charles Sabel and William Simon. These are rights to unsettle and open up state institutions that persistently fail to fulfill their functions. Destabilisation rights are dynamic checks on failures of institutionalised checks to do their job. Rights to public law litigation can destabilise defunct structures, as can rights of oppressed minorities to appeal for redress to UN institutions. Destabilisation rights enable a politics of dis-entrenchment. Networks can deliver experimental innovation in the invigoration of separations of powers. The state is often too paralysed for innovation and democratic experimentalism.

Western doctrine on the separation of powers has stultified because it has not been open to learning from the democratic experimentalism in civil separations of powers revealed in non-Western histories such as that of Timor-Leste. 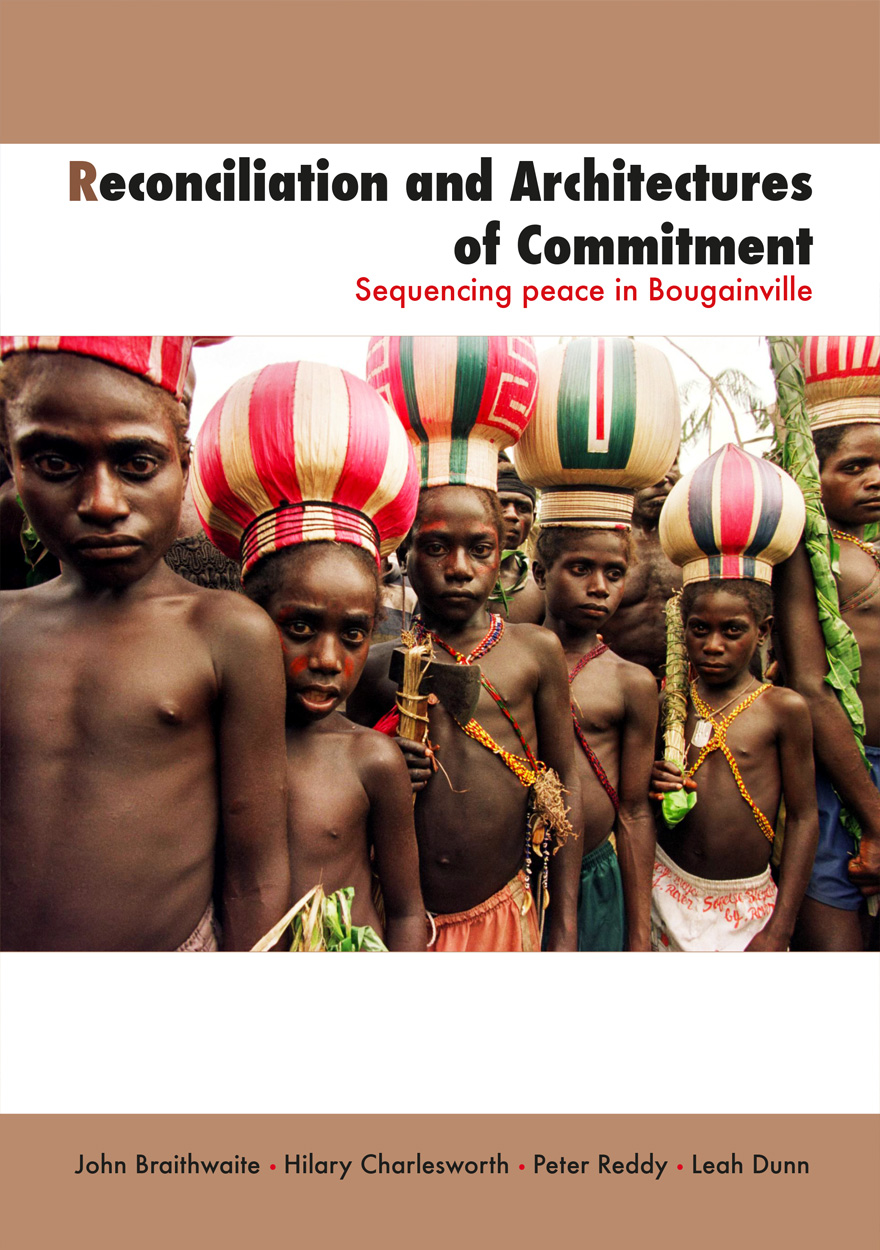 Reconciliation and Architectures of Commitment: Sequencing Peace in Bougainville

Reconciliation and Architectures of Commitment: Sequencing Peace in Bougainville is about how Bougainville managed to achieve quality in reconciliation through what we describe as a restorative peace. Peacekeepers were unarmed in Bougainville. It was also a clever peace in the way its peacemakers crafted a sequenced architecture of commitment: only after you do this will we commit to that; after we have, we expect you to put in place this other building block of the peace. Peacebuilding Compared contributed in a practical way to the peace by organizing a peace conference that brought the major spoiler armed group into the peace conversation for the first time. The incumbent President and his successor attended throughout: it is available as a video resource. Returning to Bougainville for three fieldwork trips this century was one of the great pleasures of my life, having first lived in a Bougainville village for 6 weeks as an 18-year-old anthropology student in 1969. 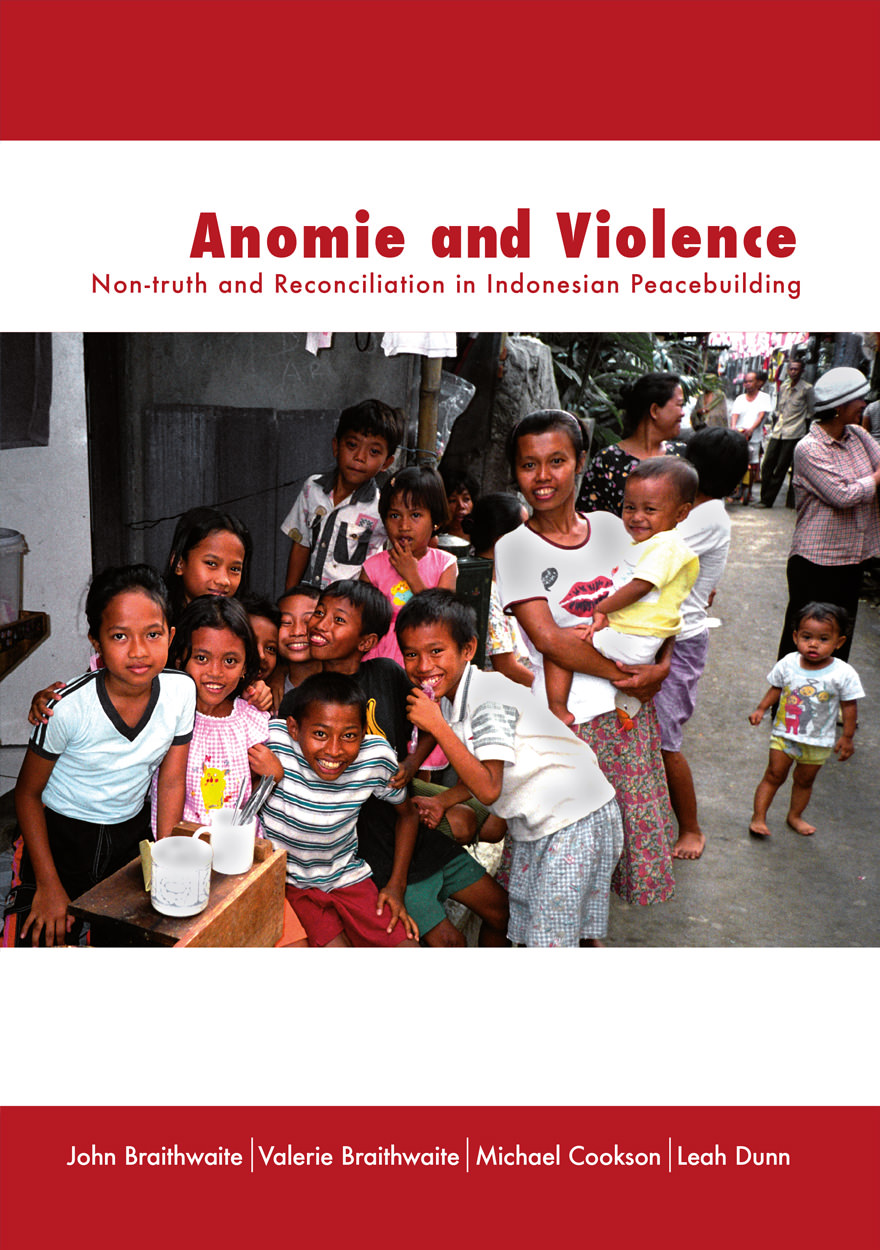 Anomie and Violence: Non-truth and Reconciliation in Indonesian Peacebuilding

Anomie and Violence: Non-truth and Reconciliation in Indonesian Peacebuilding (with Mike Cookson, Valerie Braithwaite and Leah Dunn) was a study of many different Indonesian conflicts. A practical dimension of the work was providing a secretariat for five elected West Papuan peace negotiators for several years after 2010. Despite a few talks between the President of Indonesia and church leaders, and receiving a sympathetic hearing in several meetings with the Prime Ministers of Australia, Papua New Guinea, Vanuatu and senior people from the White House and State Department, only feeble foundations for future peace with justice in West Papua were laid. The book is about peace with reconciliation being achieved in many other parts of Indonesia. However, these peace processes refuted our starting hypotheses in that they did not involve truth telling as a foundation for reconciliation. 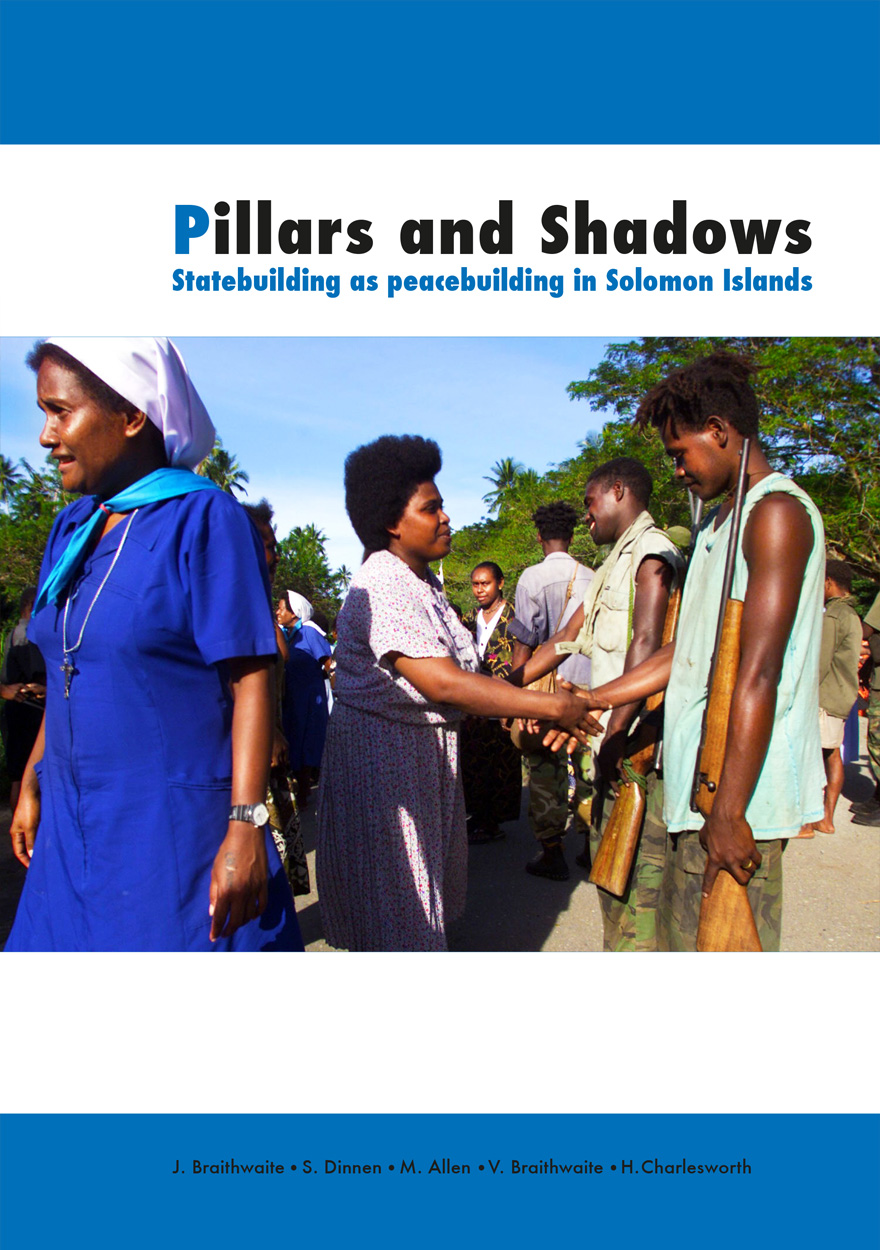 Pillars and Shadows: Statebuilding as Peacebuilding in Solomon Islands

Pillars and Shadows is about the limits of peacebuilding as statebuilding. It grapples with the problem of shadow states that compromise the effectiveness of a peacebuilding vision to build new pillars of a new state. The fieldwork for this project was a great pleasure. I worked with one of my PhD students from long ago, Sinclair Dinnen, and one of his PhD students at the time, Matthew Allen. It made me feel like the grandfather I am, though the greatest pleasure was how much I could learn from the depth of knowledge of these two great scholars of the Solomon Islands.