The network idea is that war and crime can only be controlled — and peace with justice achieved — by a fabric of prevention made up of many threads in civil society, state and global action. Even weak networks can control strong tyrannies. Yet, the very nodes of networks of freedom can themselves become nodes of tyranny. Thus, constant renewal of liberation networks is critical for peace with justice – feminist networks for the liberation of women, preventive diplomacy networks for liberation of victims of war, village development networks, civil society networks.

Two of my books are about how networks among weak actors sometimes manage to inflict serious defeats on the strong. Networked dialogue and model mongering prove to be strategic tools for social movement actors.

Social movements sometimes manage to divide big business on issues like Ozone diplomacy. Corporate environmental leaders sometimes join forces with environmentalists. They get a strategic trade advantage by working for regulation requiring laggards to follow their technological lead. Examples of these kinds are documented in Global Business Regulation and in Information Feudalism (both with Peter Drahos). These books also develop a theory of how business regulation globalizes. It is a principles-actors-mechanisms analysis where theories of modeling by model missionaries, model misers, model mercenaries, model modernisers and model mongers are important.

Networked governance by the weak can overwhelm great powers, rendering realist international relations theory predictively false. This is also revealed in my book, Networked Governance of Freedom and Tyranny: Peace in Timor-Leste, with Hilary Charlesworth and Aderito Soares. Regulating Aged Care (with Toni Makkai and Valerie Braithwaite) is my most thorough, complex and sustained empirical business regulatory research. It shows that networks can empower even the most powerless adults in western countries: the frail aged. These networked empowerment themes are taken further in my Regulatory Capitalism book.

Networked Governance of Freedom and Tyranny

NETWORKED GOVERNANCE OF FREEDOM AND TYRANNY 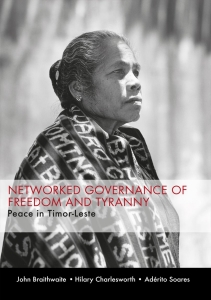 Networked Governance of Freedom and Tyranny (2012) draws all this together with the argument that networked struggles for justice, peace and freedom are the mainstay of progressive politics in the kind of world we inhabit today. For most tasks of modern governance, networks get things done better than hierarchies. Well-designed networks of power are not only mutually checking upon bad uses of power; they are also mutually enabling of good capacities for power.

Networks must be coordinated and sometimes—not always—the state is the best candidate to supply a key node of coordination. For most problems, strengthening state hierarchy to solve problems is not as effective as strengthening checks and balances on hierarchy as we also strengthen private–public partnerships, professions with technocratic expertise on that problem, civil society engagement and vigilance, and other networks of governance, while at the same time strengthening coordination of networked governance.

Networked Governance of Freedom and Tyranny is also about the idea that in politics, there is commonly a tipping point where a networked governance of freedom becomes a networked governance of tyranny. This happens when a networked revolutionary vanguard of any complexion actually takes over a state. According to our analysis, the crucial failure in building the Democratic Republic of Timor-Leste after its war was that the rebuild was not republican enough. It was too focused on building a state controlled by the three greatest leaders of the resistance and the party of the resistance. The networks that made the triumph over realist forces possible were dispensed with when they were most needed to act as checks and balances on the new executive. Networked accountabilities must humble the power that enables regimes to change.

Here there is common ground with other theoretical traditions such as the notion of ‘destabilization rights’ introduced by Roberto Unger, Charles Sabel and William Simon. These are rights to unsettle and open up state institutions that persistently fail to fulfil their functions. Destabilisation rights are dynamic checks on failures of institutionalised checks to do their job. Rights to public law litigation can destabilise defunct structures, as can rights of oppressed minorities to appeal for redress to UN institutions. Destabilisation rights enable a politics of dis-entrenchment.

Chapter 13 of the book concludes that in future we might evaluate international peace operations according to: